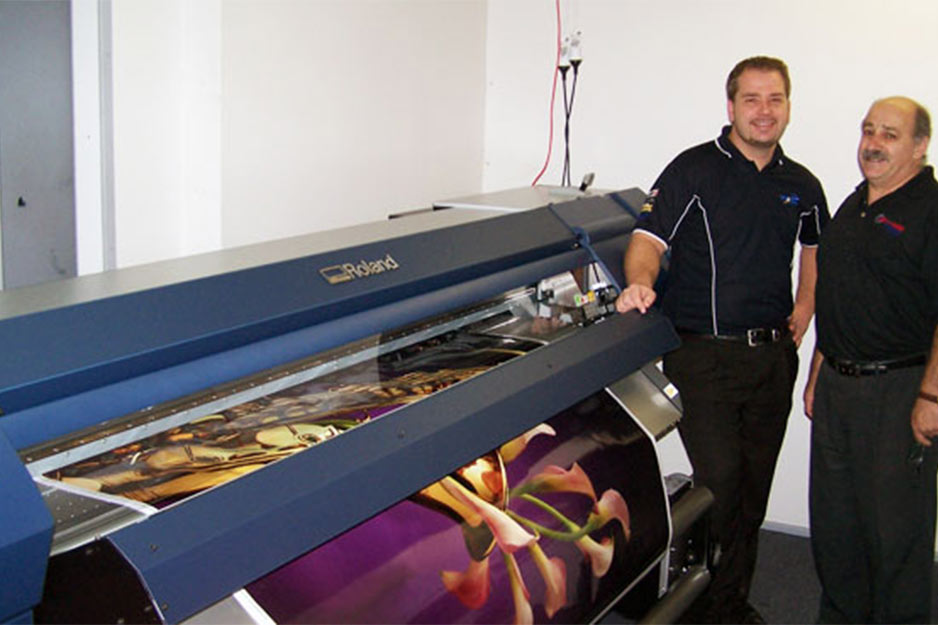 A shiny new Roland DG AdvancedJET AJ-740i from Project Engraving and Digital has turned a Wollongong sign shop into one of SignARama’s rising stars.

SignARama is one of the largest franchises in the world. After three years without a significant upgrade, SignARama Wollongong Owner Michael Kyriacou needed something special to keep up with the increased work load and growing range of projects his clients were demanding. He also wanted to attract their attention by adding powerful new industrial capabilities to his production environment.

“A lot of our work is for coal mine signs and other industrial signage, and a lot of it requires us to print on reflective vinyl,” he said. “In particular, we wanted to be able to print on class one reflective vinyl, which is effectively the same thing as street signage. This application requires heavy duty, full solvent inks, so we had to go with a machine specifically designed for the task. Without the AdvancedJET, these jobs would have been impossible.”

“This machine has been running for eight weeks and in that time we have tripled our output due to its speed, quality and media support.”

Kyriacou reviewed a variety of printers, but could not find a machine to match the capabilities of the AdvancedJET. ”Many didn’t recognize the class one reflective vinyl and for those that did print on it, the ink wiped straight off the surface,” he said.

SignARama Wollongong soon became the first business in Australia to own an AdvancedJET and that distinction has come with many benefits.

“We offered our services to the entire Australian franchise and now other SignARama shops are sending work to us,” he said. “No other store can print on reflective vinyl.”

Kyriacou’s business has also grown exponentially, despite a financial climate that is forcing most businesses to downsize.

“This machine has been running for eight weeks and in that time we have tripled our output due to its speed, quality and media support,” he added. “We just started marketing to clients that this printer is the first of its kind in Australia – and that alone has won us a lot of jobs. The AJ-740i allows us to supply industrial signage that reflects the same high quality we give our everyday and corporate accounts.”

Kyriacou said his staff had no difficulty adjusting to the AdvancedJET and, in fact, that it had made all their lives much easier.

“Before, 82' (25 meters) of banner would have taken all day,” he said. “Now it takes us two hours. The boys transitioned from the old machine straight to this one. The quality is better. We can print a large volume of prints without having to adjust it. The accuracy is very good and the finished prints including the colors are true to our original art. It’s everything the old machine wasn’t.”

He praised the team at Project Engraving and Digital led by Ryan O’Sullivan, Project’s digital specialist, for making the transition as smooth as possible.“They really know the machine and they worked really well with our team,” he said. “They sat down and worked with us, no matter what the problem was. They were the only company that delivered what we needed and they really are leading the way.”

Glenn Conyers, Project’s general manager NSW stated, “As a company, we always strive to achieve this match with our customers’ business needs. We don’t just talk about providing integrated solutions, we deliver them!”