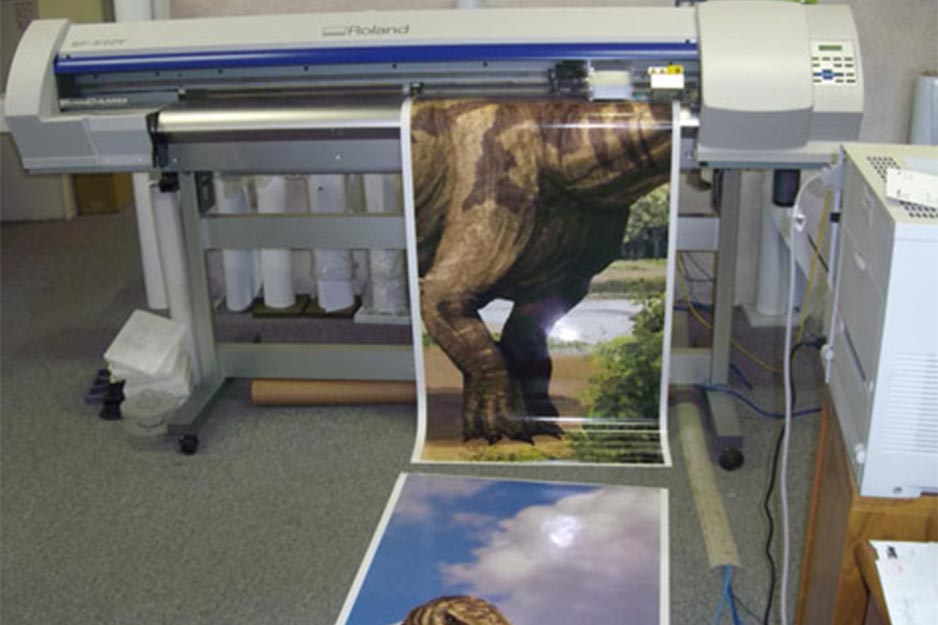 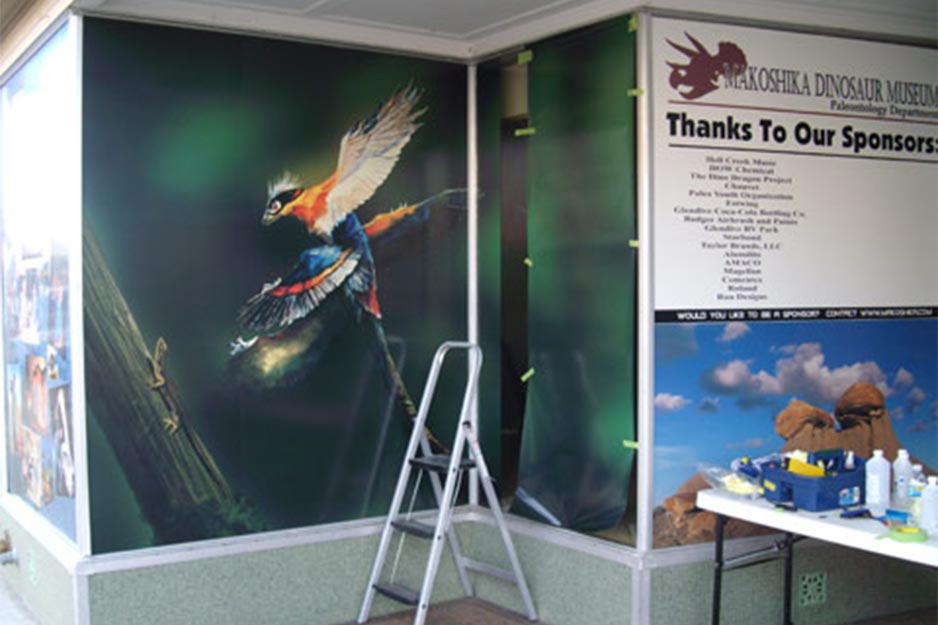 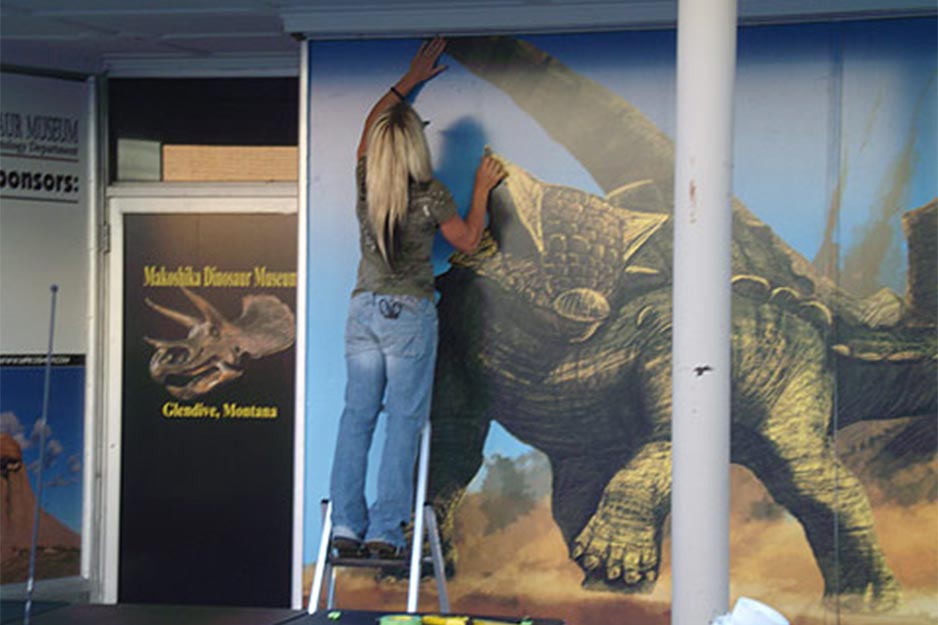 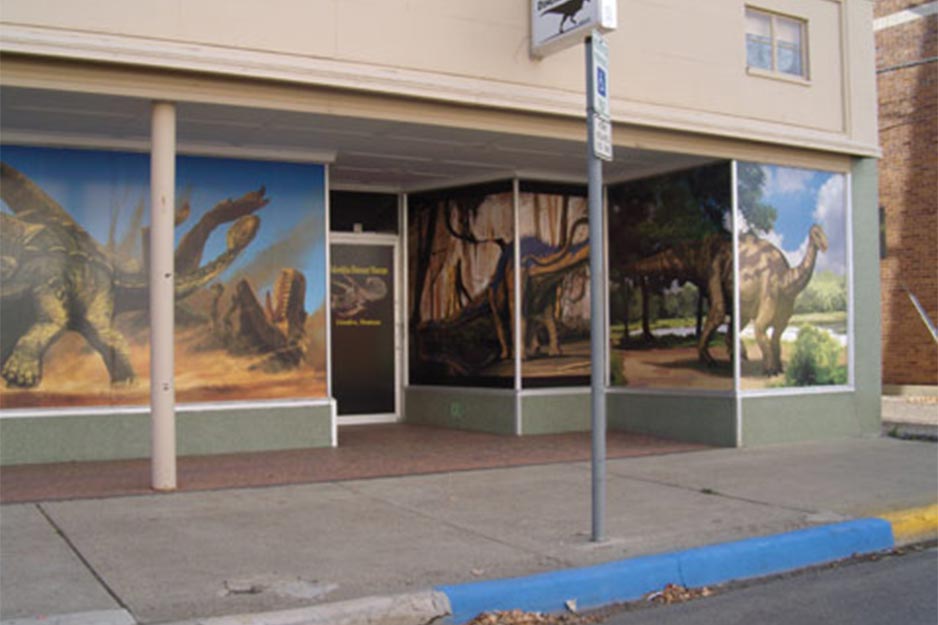 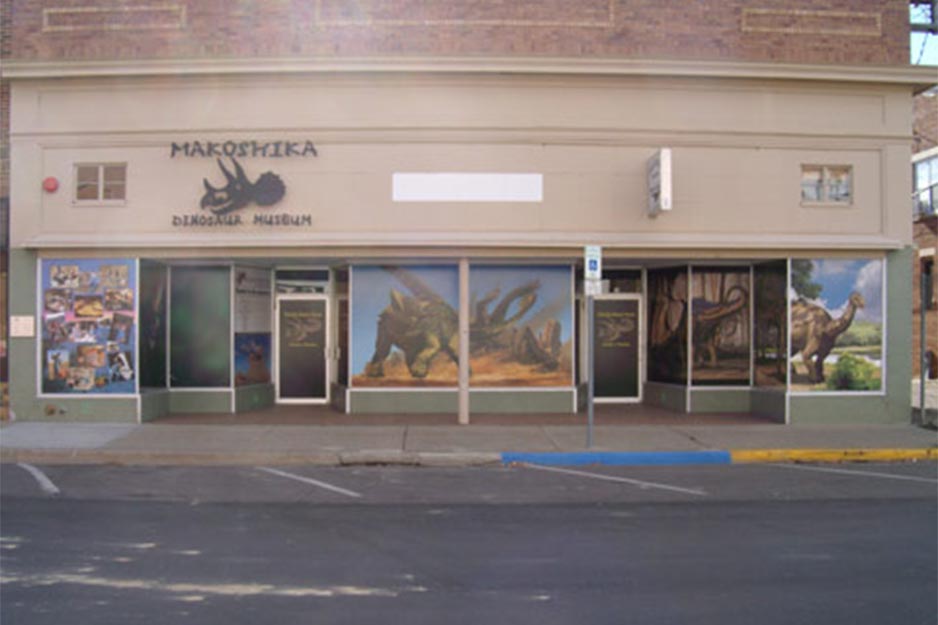 What does it take to turn a former J.C. Penney store into a dinosaur museum? According to Makoshika Dinosaur Museum founder, Steve Bury, “a lot of volunteers!”

Bury and his wife founded the museum as a way of giving back to their community while helping to promote its location in one of the best dinosaur digging regions in the country. Located in Glendive, Montana, their museum is part of the Montana Dinosaur Trail and features a diorama including a 28’ allosaurus and a 22’ stegasaurus, designed by world renowned dinosaur replica expert Charlie McGrady.

Among the chief architects of the transformation from retail to reptile are sign shop owners Tressa and Justin Rau. The Raus own Rau Designs in nearby Sidney, Montana, and volunteered to print, laminate and apply enormous dino-graphics to cover each of the former department store’s massive exterior display windows. A designer in Japan provided the artwork, and Roland DGA donated media and laminating film.

Justin and Tressa ran the project on their Roland VersaCAMM SP-540V 54” printer/cutter, purchased in 2005. “We love our Roland,” said Justin. “It’s incredibly easy to use and because of its wide range of applications, our business has more than doubled since we got it.”

“We love our Roland,” said Justin. “It’s incredibly easy to use and because of its wide range of applications, our business has more than doubled since we got it.”

To prepare the dinosaur museum images for printing, Tressa enlarged the artwork and created a backdrop from two photos of the Makoshika Badlands. She then dropped in several photos of the museum’s owners and their associates in their digging gear as well as images of children enjoying the museum exhibits. Tressa arranged these images in scrapbook style, then added some text including the name of the museum. Larger artwork of the dinosaurs was arranged to look as authentic as possible.

Using the window measurements, Justin split the designs into 24 sections, each 30” x 7.’ The scene in the center display window is 7’ x 14’ and features a T-Rex locked in combat with an anklyosaurus. Justin set up the designs with a ¼” overlap and printed the panels on premium cast outdoor material, then added a UV protective laminate sheet. Justin and Tressa applied the images using felt squeegees over several days.

One challenging aspect of the project was the constantly changing autumn temperatures. “One day it was 17 degrees and two days later it was 72. Every time we printed, I cleaned the media and did an environmental match. Sometimes I did the match twice a day,” said Justin. “We use only Roland inks, because they are so smooth and the colors print cleanly,” said Rau. “In fact, the scenes we printed are so realistic that one driver almost had an accident while gaping at the windows!”

In addition to their work for the museum, Justin and Tressa handle design and print work for local businesses and government agencies. They produce signs for county and city machinery, police cars, road graders and heavy equipment and design and print many of the nonlighted business signs in town. They also produce vehicle, race car and motocross bike graphics. “The VersaCAMM is a wonderful tool. It’s kind of like having art class every day,” said Tressa. “We can print and cut whatever we can imagine.”

Justin and Tressa rely on Roland media to produce superior graphics. “Most of the time, what the Roland prints looks even better than it did on screen,” said Tressa. “We’ve tried a lot of different media, but we get the best results with Roland laminates and printable media.”

Recently Rau Designs created a 16’x16’ blow up of a photo of a local drawbridge over the Yellowstone River which now hangs in the town square. “That came out of the Roland in four sheets,” said Justin. “The bridge is a symbol of Fairview, and the colors were key because all the local flowers are in bloom in the background. The mayor was really pleased with it.”

“With the VersaCAMM, we are confident we can handle any job that walks in the door,” said Justin. “It prints and cuts whatever we need – the sky is the limit!”