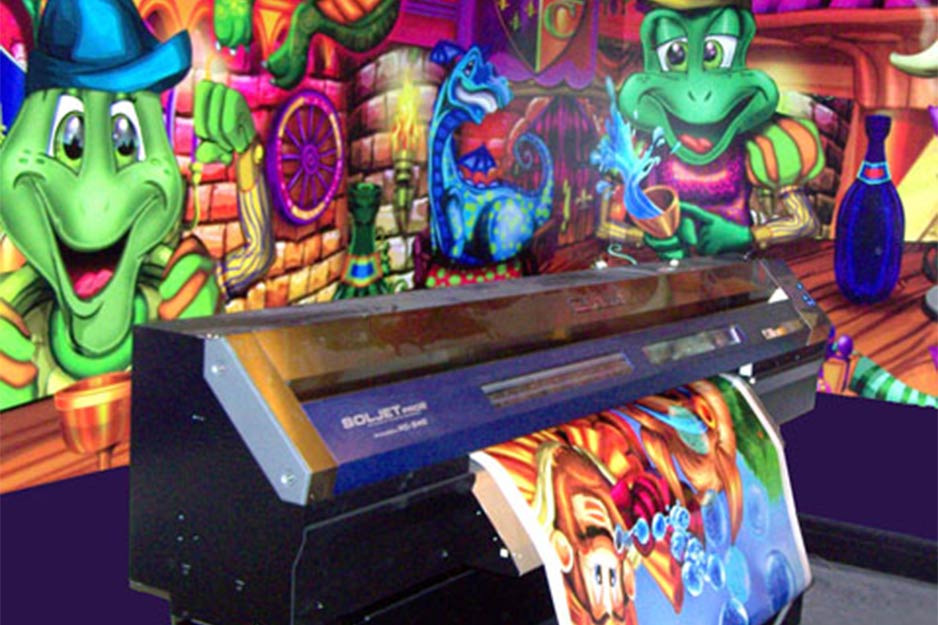 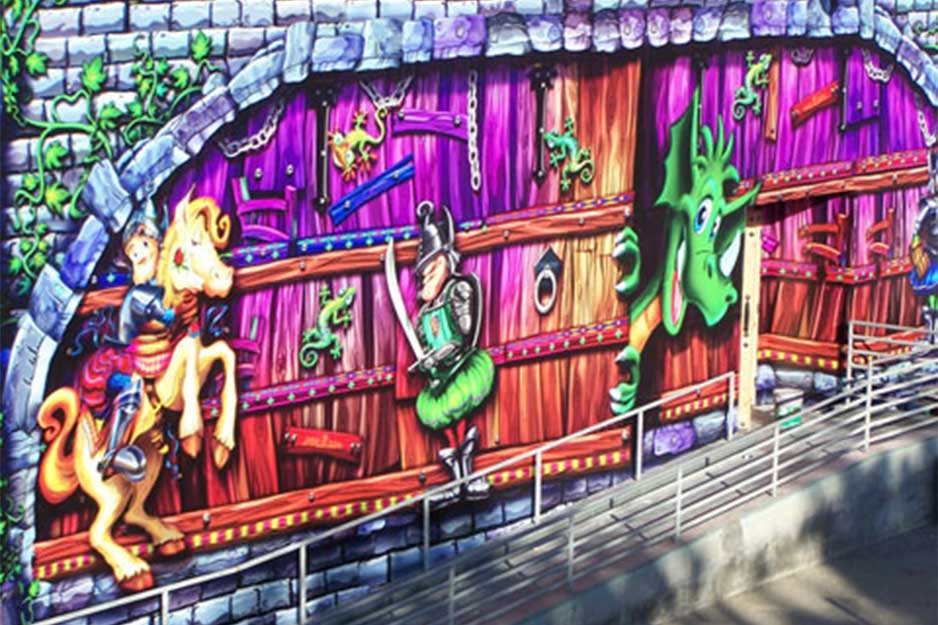 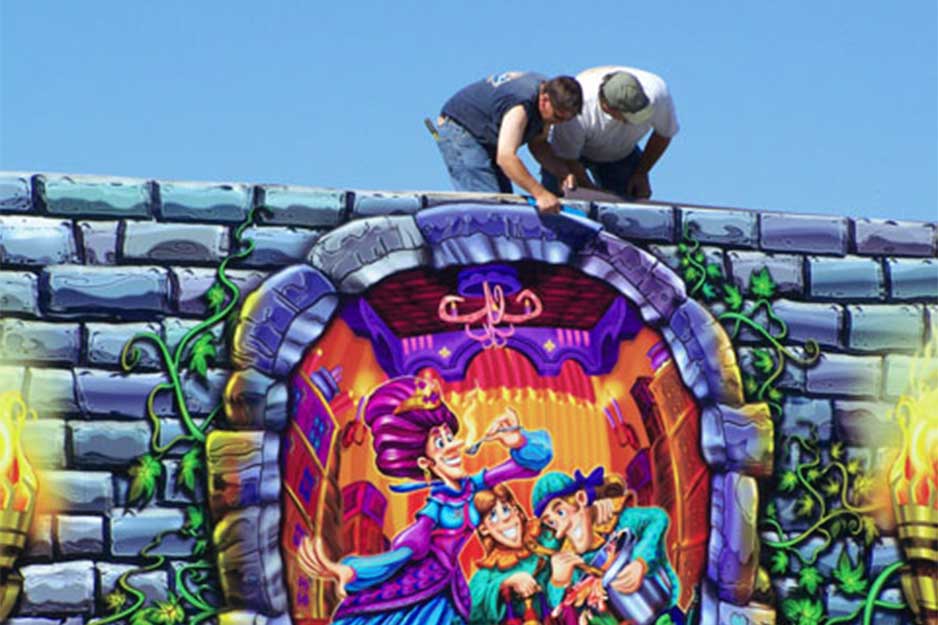 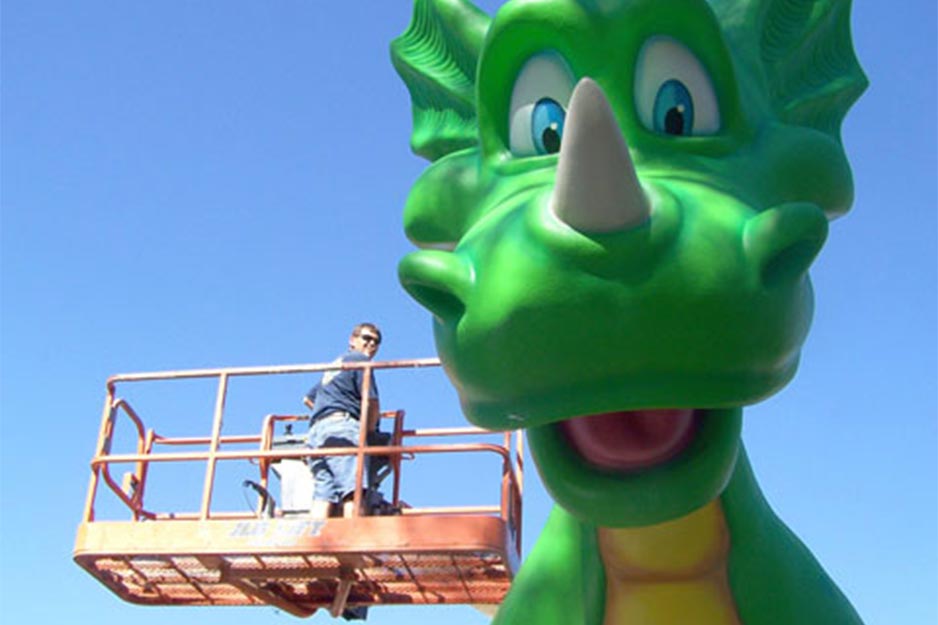 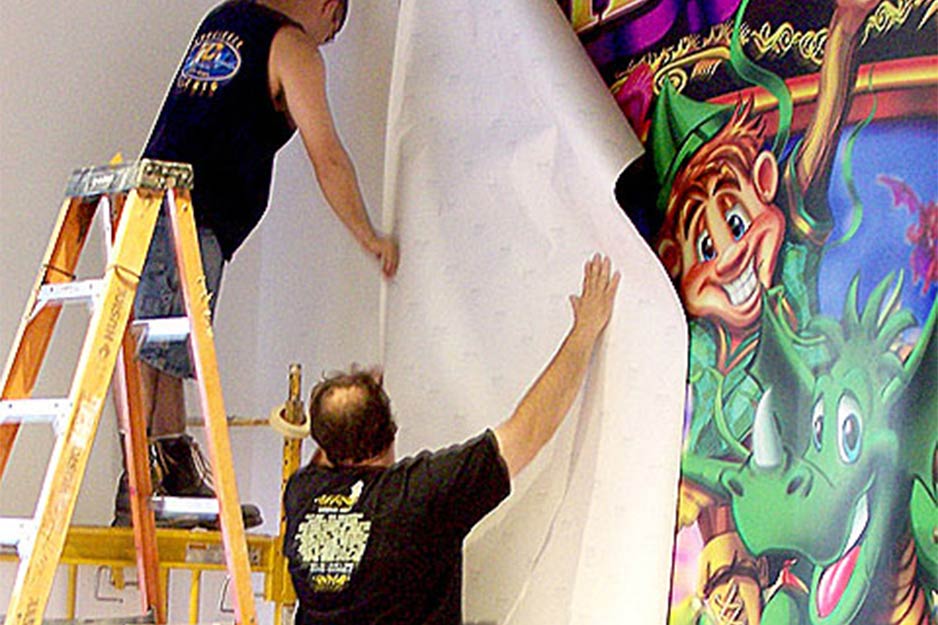 When M.T.T.S. Graphics founder Craig Remaley and his business partner, Dan Webster, purchased their Roland SOLJET PRO III SC-540 eco-solvent printer in 2003, they never imagined it would become the cornerstone for their move into a new market: large digitally printed murals for the family amusement center industry.

Traditionally decorated using hand painted scenes, family amusement centers across the United States are looking for better, cheaper ways to create or update their look. “With digital media, we can significantly increase the lifetime of the decor,” notes Craig. “Also, digitally created graphics are easily incorporated into other promotional materials such as posters, invitations and banners.”

M.T.T.S. Graphics recently assisted in a spectacular design for Burbank, California’s Kid’s Castle. Kid’s Castle is a new 15,000 square foot upscale family entertainment facility featuring a video game room, carnival rides and a kid’s crawl port. The facility itself was designed by the Dave & Buster’s designers and is the first in a new chain of centers.

Craig and his team in upstate New York worked with Kid’s Castle’s owners for seven months to develop an array of 50 characters and create bright, oversized graphics that complemented the facility’s medieval theme. To accurately plan the placement and content of the murals, M.T.T.S used computerized architectural drawings and 3D software to extrude the walls, creating a virtual image of the facility. This technology allowed them to “walk around” the yet-to-be-built building to determine the optimal use for each wall space.

“With the SOLJET’s high quality printing, we can achieve 3D effects and other effects, such as a blacklit look, that really set our work apart from traditional murals,” said Craig.

The group shared files over the Internet during conference calls to discuss the designs and the concept for each room. In total, M.T.T.S. designed more than 5,000 square feet of signage and murals for the interior and 2,000 square feet for the exterior of the facility.

M.T.T.S. printed the designs on the SC-540 and their new XC-540, producing panels that were a full 54 inches wide. They used Roland inks to ensure eye-popping color and laminated the panels for durability. “With the SOLJET’s high quality printing, we can achieve 3D effects and other effects, such as a blacklit look, that really set our work apart from traditional murals,” said Craig.

To guarantee a smooth installation, Craig contacted Don Budde of CalComp Graphic Solutions to arrange a loaner SOLJET from Roland. “The XC-540 is so quick and versatile, having one on site was tremendously helpful,” said Craig. “We could run new prints in minutes.”

For the exterior of the building, M.T.T.S. designed a 200-foot wall mural as well as a 14-foot 3D dragon, which was wrapped and mounted on the roof. While the wall and dragon were being installed, kids and parents playing at the field opposite the building came to the construction fencing to ask about the facility, creating the kind of anticipatory buzz marketers dream about.

In addition to extensive indoor signage and smaller murals, M.T.T.S. also designed four 60-foot long murals, one for the main dining room and three for the party rooms. The themed party rooms have 13-foot ceilings which M.T.T.S. used to full advantage, creating murals that feature balconies full of the Kid’s Castle characters. Designs like this one, which create the illusion that the characters are celebrating the guest of honor, enhance the facility’s appeal to families looking for great entertainment value.

Other family entertainment projects M.T.T.S. Graphics has recently completed include a Fun House in Canada, murals for a large county fair in Washington State, and an interactive batting range in San Jose, California. They are also looking into expanding into other amusement sectors, such as skating rinks and arcades.

These days, M.T.T.S.’s printers are constantly running to keep up with the demand for its large murals and character-driven signage. “Our business thrives on the ‘Wow’ factor,” said Craig. “We count on Roland to help us keep the excitement going!”